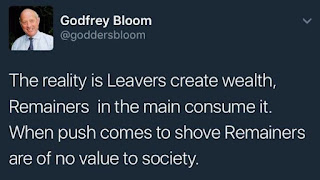 It may seem to you, when you look around the world that everywhere you look; evil people have all the power.

When you cast your eyes across the Atlantic pond, you can see that soon enough, Donald J. Trump will ascend the steps of the White House, and you may despair at the thought.

The idea that such a blatantly evil and criminal gangster might hold the fate of the Earth, and ergo your children’s future in his narcissistic hands might seem the ultimate terror to you?

You may look across the European and British political landscape and witness that only the Super Rich Elite have any influence and power and, that this power is so heavily concentrated in the hands of far right extremists that you might surrender all hope?

You may think there is no way out from under their hegemony and succumb to their evil, bowing down on your knees like a slave in the hope of surviving another week, another day unscathed by their hate?

You may think that these are the end of days?

But I tell you, such notions, though understandable, are wrongheaded.

The far right extremists such as Nigel Farage, Donald Trump, Tony Blair, Theresa May, Marine Le Penn, and others around the world, have a limited number of days left to them, for their current rise to supremacy is a castle built on sand.

For decades, ordinary men and women were left in the gutter to rot by the neoliberal elite.  They were left with no hope for change, no hope for a better life.  Thus it is that when chancer’s like Adolf Hitler, Nigel Farage, and Donald Trump come along, this mass of disenfranchised poor, seeing no other way forwards for themselves by voting for the same old same old, the status quo, will ever seek to change their lot by voting for those who promise them a new order, but these promises are a miasma.

They are the promises made by villains to cowards who refuse to admit their villainy, because to do so means they will have to change the world themselves rather than rely on others to do it for them.

All too soon, those who voted for Donald Trump are going to see their freedoms whittled away, their life chances lessened, their opportunities diminishing.

All too soon the penalties imposed upon us for disobedience to these new authoritarian and unjust laws, will be raised to unbelievable heights.

“Fascists do not do mercy, and the penalty for defiance to their hegemony has always been death.” – Kanjin Tor

How many times over the last decade have you heard me say this and it remains true today as when I first coined the phrase over 20 years ago...

By voting for these monstrous creatures as their overlords, [and please can we at least be honest about what they are] the poor have not created a New World Order, but have instead - reinforced the Old World Order.  It is the Order of the Authoritarians, the Tyrants, The Fascists, and these types do not do mercy.

With absolute predictability, the poor who voted for these 'Fascist Scum' have moved themselves yet another step forwards to the very doom they sought to forestall.
And it was all entirely predictable.

In fact I predicted it.

So you might be sitting there and despairing, but I tell you that you must not and here is the reason why.

History teaches us that however powerful these demagogues might appear, it is always a fantasy and, that sooner or later their power will collapse.

So I say to you, resist.

Resist your own cowardice to succumb to their base desires, resist your despair, resist your weariness, and fight back.  It may, right now, seem that their hegemony is immovable, solid, an all powerful entity in its own right, but I tell you, it is a self delusional phantasm, and their arrogant belief in their own special place in history, is nothing but a pie in the sky.

These people are not ’Special’.

‘Destiny’ is a false concept.

Our Fate is what we make it, for we, all of us, reap that which we sow!

Their own avarice and arrogance will destroy them for history shows us that no ‘Mighty Empire’ can outlast the tenacity of the meek.

Of course they can, and in all probability will, slaughter millions.  But in the end, no matter what furies they unleash upon the Earth, these 'Fascist Scum' will die in a bunker alone, whimpering about betrayals...

As a Civilisation we have undoubtedly suffered a setback, but ‘Humanity’ has endured many such setbacks, and I can promise you that there will be others.  Ultimately however, we as a species move forwards, it is our nature, it is in our DNA.
We humans only survived the dark of our prehistoric night because we are a co-operative animal, and it is this need for each other that these ‘Fascist Scum’ can never understand.

Fascism is an aberration of humanity, a dead end if you will in the human family tree.  People like Nigel Farage seek to keep an ever changing world the way it once was in their puny intellects, but never was once in reality.

They are the ultimate cowards, men and women who view change as something to fear, that others are a terror to hide from, or to destroy.
You must never forget this fact.  Keep that thought pure and in your mind always.
I have witnessed these types of creatures up close and everything I have ever learned about them is that they are terrified, they stink of it, and it leaks from their pores.  They fear your skin colour, your creative nature, that you might change their world.  Your compassion for others mortifies them, they literally stink of fear.

Now you may say “But if I resist they may kill me?” but I say to you “If you don’t, nothing is more certain than they will kill you.”

This is an entirely predictable outcome of Fascism.  Authoritarians only have one card up their sleeve – VIOLENCE.

But their violence does not come from a natural courageousness; it comes instead, from fear. Fear of the other, fear of loss, fear of change, fear of fear itself.
‘All Fascists are Cowards’.

They resort to violence because they are stupid, venal, pathetic little creatures.  They abuse others because they value nothing but themselves.  They think of themselves as ‘special’ but in the end they are as valueless as the people they devalue and seek to destroy.

So do not despair my friends.  Remember, they will die in a bunker whimpering about betrayals and forever be reviled as ‘Scum.’

I wish you all,

I try to be good and kind, sometimes I fail. I hope others will forgive me when I do.